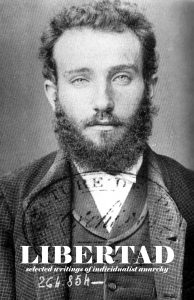 A collection of writings by & about visionary French individualist anarchist Albert Libertad.

One comrade said of him that he was a one-man demonstration, a latent riot. His style of propaganda was summed up by Victor Serge as follows: “Don’t wait for the revolution. Those who promise revolution are frauds just like the others. Make your own revolution by being free men and living in comradeship.” His absolute commandment and rule of life was, “Let the old world go to blazes!” He had children to whom he refused to give state registration. “The State? Don’t know it. The name? I don’t give a damn, they’ll pick one that suits them. The law? To the devil with it!” He sung the praises of anarchy as a liberating force, which people could find inside themselves.